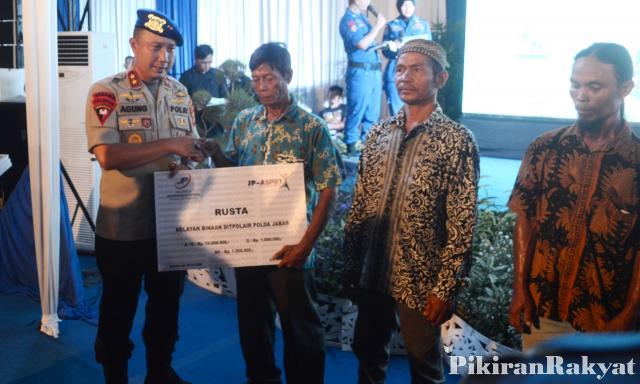 Pikiran-Rakyat.com (4/12/2018) | Thousands of Cirebon Pantura fishermen has been insured. They are given insurance as collateral assistance for fishermen in the event of an accident.

For the payment of insurance premiums, the West Java Regional Police Headquarters cooperates with a number of companies, one of which is Cirebon Power. The granting of fisherman insurance wass symbolically handed over in commemoration of the 68th Anniversary of the Polairud, at the West Java Regional Police Headquarters, Cirebon City, Tuesday 4 December 2018.

“As many as 18 thousand fishermen among them, are in the West Java Pantura region. The insured fishermen are scattered in the northern coast and coast, “Agung said.

According to Agung, payment of insurance premiums from companies was done by utilizing CSR funds. “This insurance is to provide guarantees to fishermen. Although the value of the guarantee is not large,” he said.

Since the beginning of this program, up to now, there have been around 18 thousand fishermen in the Cirebon Pantura, facilitated by this free fisherman insurance.

“This program continues to grow, this year we provide free insurance to 3,000 fishermen,” said Petrus.

According to him, this program has become a pioneer in providing accident insurance for fishermen, to provide protection to them while working. Before 2011, he continued, fishermen on the Cirebon coast did not get any protection at all.

With insurance protection, it is expected to ease the burden on fishermen when a disaster strikes. “Of course we hope that there will be no accident cases. But in the last few years, fishermen affected by the disaster really feel the benefits of this insurance,” he said.

One of the fishermen from the Pengarengan Village in Cirebon Regency who received insurance, Robani, admitted that he was moved by the provision of insurance assistance. According to him, small fishermen like him will not be able to pay insurance premiums on a regular basis, even if it’s for his own protection.

Before the Cirebon Power and Polairud initiative to provide free fisherman insurance, Robani claimed not to have insurance coverage from anywhere.

“Of course we are very grateful to Cirebon Power and West Java Regional Police. Because this insurance is very helpful for fishermen,” Robani said.

In addition to insurance, Cirebon Power and the West Java Regional Air Force Directorate work together in the field of fisherman assistance. On this occasion, the Chief of West Java Police and Cirebon Power’s President Director, Heru Dewanto inaugurated a “Child Friendly” reading park that was built in Citemu Village, Cirebon.

This reading park aims to increase reading interest and the literacy ability of children of fishermen and coastal communities. Some facilities that can be utilized in the Child Friendly Coastal TBM, namely reading books and innovation books, as well as marine safety props facilitated by West Java Regional Police.