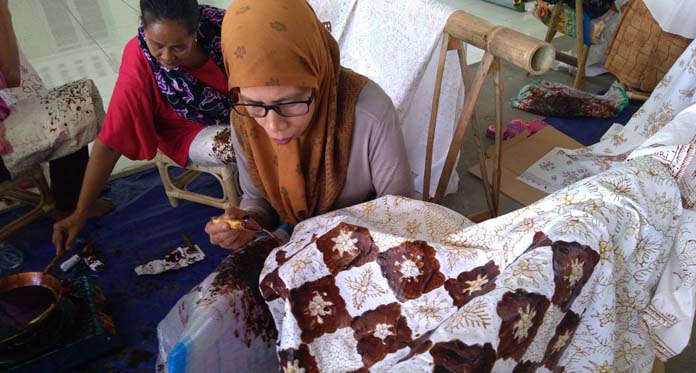 RadarCirebon.com (28/2/2018) | Kanci Village residents never knew how to make batik. For generations, they were skilled at making shrimp paste. That was why, when there is training to make batik enthusiastic citizens. Something new and has never been learned.

“I just want to try new experiences. This is the first time learning batik, it turns out it’s fun too,” said Ane Fenny (38), a resident of Kanci Kulon Village who started learning batik since two years ago.

I like wearing batik clothes myself. At his house, there are some batik clothes. After being able to make batik, one of his little dreams is to wear batik clothes of his own work. Unfortunately, until now the will has not been accomplished.

“I can make batik, it’s just not smooth yet. Yes, a little starting to understand. Just learn again at home,” said Ane.

I really like learning many new things. The hooded woman, also often makes beautiful princess cake crafts. The cake is sold to order.

“If at home like to make cake orders. Make additional income. Yes, if you can make batik so there is an additional new income,” he hoped.

Unlike the case with the Princess of the Holy Light. Although not yet said to be proficient, the mother of one child has been able to sell batik cloth the results of his hands. He studied since three years ago. But due to lack of practice, his skills are not honed.

“Lost again. Three more months of study. The ones who can only be solo, those who make essens don’t really understand, “said Putri, who lives in Kanci Wetan Village.

Indeed, currently batik cannot be relied upon as a main income, but rather an initiative to help perpetuate the culture of Cirebon. “If something is sold, we are very happy. But this was also to preserve culture,” said Putri.

Although batik has become a daily wear worn by the community, learning batik is a new thing. Moreover, Cirebon became one of several regions in Indonesia known for producing batik crafts.

Cirebon batik motif that was Mega Mendung was already well-known, even to foreign countries. However, generally Cirebon batik artisans are still concentrated in Trusmi Village, and some are located in Ciwaringin Village. But, this housewife hoped that someday their craft of batik can also penetrate the Cirebon batik market

The batik training class, which ran again in 2018, was attended by 26 residents, the majority of housewives. The trainers are from batik artisans in the village of Trusmi. Mas’ud, his name. 44-year-old man, had studied batik since childhood. He learned batik from his mother, who was a batik worker.

Mas’ud said that the potential for batik sales at this time was quite good, even relatively easy with internet technology innovation. He said 40 percent of batik orders came from online sales. Batik indeed has its own market share.

Now, the most widely ordered batik plates and lamp models. For the price of batik cloth varies, depending on the neatness of the product and artistic value. It was just one standard batik cloth that is generally sold in the price range of Rp200-450 thousand. Some even go beyond that.

“If the batik cloth is sold for the value of the art, so it is also difficult to set the price. The standard price is Rp200-450 thousand,” he said.

With this vast marketing potential, Mas’ud believed that if residents can produce written batik, they would increase their income. But, to be able to master batik requires perseverance and seriousness.

Because this batik,wais a craft that pays attention to details. Everyone can make batik, as long as he wants to learn.

“If the process of working on one cloth can be one month, half a month, and even one day can also be,” he said.

There arevtages in making batik. First, create a design pattern for image motifs. New batik cloth is given coloring. After the color is given, enter the  pelorodan or the removal of the wax from the fabric.

Usually released by using hot water. After that, the work is finished and batik cloth is ready for sale.

The written batik training for the residents of Kanci Kulon and Kanci Wetan villages, has its own impression. For Mas’ud, training like this needs to be expanded, so that batik as Indonesia’s cultural heritage remains sustainable, because it does not run out of craftsmen.

“We have been running since two years ago, indeed it had stopped. But after we examine it again, it turns out that this program has the potential to be continued and there are quite a number of enthusiasts, “said CSR Manager of Cirebon Power, Yusuf Arianto.

Yusuf admitted that training in batik making as a community empowerment program initially triggered doubts, because the Kanci community was not from a batik craftsman background. But apparently the community was quite enthusiastic; some even were able to make their own batik.

“Most importantly, this is our form of contribution to create business opportunities for the communities around us, as well as to preserve the culture of the people of Cirebon,” he said.

According to Yusuf, this batik training has the potential to improve the people’s economy. Most of the participants were housewives, who worked at home. If they were able to make batik that was worth selling, of course they can get more income.

“Instead of working in factories, for example, it would be better to generate additional income with the skills to produce batik. You can do it at home, and you can still take care of the children, “he said.

As a result, it was felt by the residents who attended the training. Even though it was only the basic stage, they can learn how to make batik and then practice it at home.

Yusuf and the trainer also made a pattern of cooperation in marketing batik the work of residents. So for residents, who can make batik that is worth selling, will later be purchased, according to market orders.