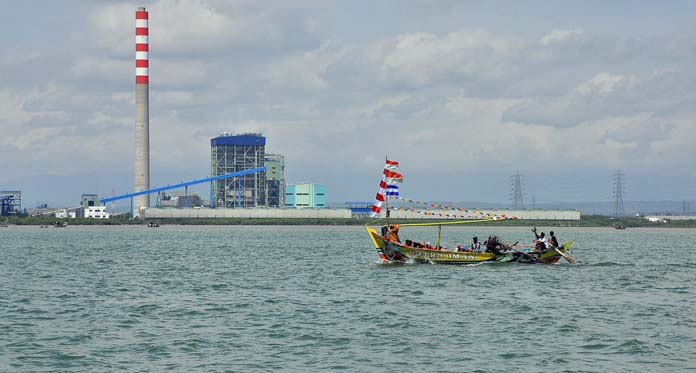 RadarCirebon.com (6/4/2017) | Cirebon Power Unit I Coal Fired Power Plant (PLTU) became a pioneer in industrial growth in the eastern region of Cirebon (WTC). Unit I power plant was built on an area of ​​99 hectares in the scheme of Cooperation in Utilization of State Property with the Ministry of Environment and Forestry (KLHK).

The process of establishing the Cirebon Power Unit I Power Plant began in April 2007, the first construction in 2008 and began operating in July 2012. The investment value is USD 850 million.

Cirebon Power is expanding its second phase of construction of a Coal Fired Power Plant (PLTU) with a larger capacity, which is 1x1000MW with an investment of USD 2 billion. Later it could increase the number of electricity users to 4.5 million people.

“Currently, the entire licensing process is complete, and in the middle of 2017 the construction phase will begin construction,” said the Director of Cirebon Power, Heru Dewanto.

Head of the Labor Market and Labor Market Information Section of the Cirebon Regency Manpower Office, Bishop Ibrahim concluded, the movement of the industry provided employment opportunities and other derivative impacts. Like the movement of supporting sectors that could be utilized by local communities.

It was just that, for local governments to be homework. How to prepare competent human resources?  So that the impact of the investment presence can be felt more.

Based on the data, the level of work participation in Karengwareng District was at 42.95 percent and Karangsembung 45.51 percent. Almost similar notes were also seen in other districts.

This condition was much better, although it has not been able to compete with districts in the western region. As an illustration in the Plered District work participation rate was 69.92 percent and Weru District was 69.36 percent.

“In the eastern region, the labor market is actually quite wide. There is Indofood which absorbs thousands of workers. Then later there is PLTU II which is estimated to require two thousand workers,” he said.

This opportunity, he said, must be captured by the community around the industry. Moreover, the government has established a Job Training Center, as a concrete step to prepare human resources. “Reluctant mindset, reluctant to take part in training, must be changed. Do not get to the origin of work, “he said.