Cirebon Power Has Agreed to Recruit Labor from 9 Villages

Cirebon Power Has Agreed to Recruit Labor from 9 Villages 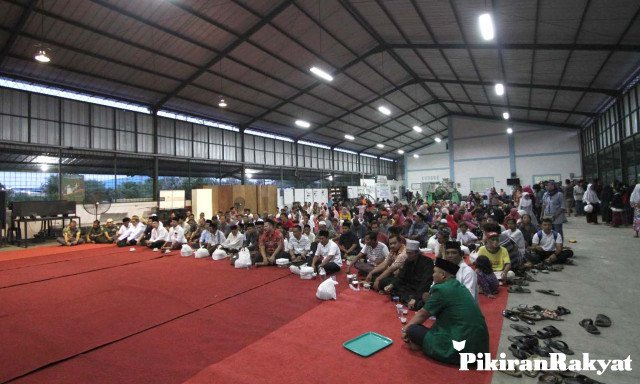 Mind- People.com (17/5/2019) | Cirebon Power (CP) has a different pattern to strengthen the friendship while empowering residents around the Kanci Power Plant, Cirebon Regency. Taking advantage of the momentum of Ramadan 1440 this year, the company gave up its routine breakfasting together (bukber) which has become a tradition every fasting month.

The different thing is the organizer of the activity. Previously, the CPO activities were carried out entirely by the CP, this time the implementation was entirely left to the surrounding community who had been a partner of the company.

“We use the momentum of Ramadan to strengthen friendship and partnership with citizens. The pattern of empowerment is by giving up the bukber activities fully to the community, “said CP Director Teguh Haryono, Thursday, May 16, 2019 evening.

Bukber conducted by residents was held on Thursday afternoon yesterday. The CP management ranks as the party invited by the residents as the organizers, they mingle closely with at least five hundred residents when the event takes place.

“Everything is arranged by local residents. We ourselves are the invited party. So, it was present as an invitation from the organizers,” Teguh said.

The bukber event was held at the workshop venue for CP’s training which was located not far from the PLTU, still around Kanci Village, Astanajapura District, Cirebon Regency. It was also on the initiative of residents who from the beginning borrowed CP facilities for activities that invited more than five hundred people.

“Said the residents, the most adequate is indeed in our workshop. We invite it because it is indeed looking for a representative place that is attended by hundreds of people is not easy in Kanci, “Teguh explained.

Present at the event were religious and community leaders in nine villages around the Kanci power plant, as well as elements of deliberation between regional and sub-district leaders. As usual, in addition to bukber, the activity was also accompanied by the distribution of compensation to orphans and elderly.

“This activity is a joint effort of the community to maintain mutual harmony. For us, the existence of CP is not only living in the community, but also living in society, “said Teguh who was asked to participate in giving a speech at the booklet activity.

On that occasion, it also raised the matter of the recruitment plan for local workers. It was explained that CP had signed agreements with committees in nine villages and would maximize the portion of the local labor to reach 50 percent.

Teguh said, there was already an understanding with the contractor and sub-contractor who would be involved in the construction of the Cirebon Power Unit 2 power plant related to the local labor. He hoped that the presence of committees in nine villages could be a bridge for the allocation of local workers. “Hopefully the contribution of the committee can benefit the community,” he said.

“The principle is any type of work that can be mastered, can be held by local residents,” he said.

Teguh added, currently there is a gap in community capacity, with work needs. So the Vocational Center or workshop where it is used for bukber activities becomes one of the solutions to produce local workers whose skill competencies meet the requirements.

“We train people in the Vocational Center first, when their abilities are appropriate, then they can be employed,” he said.