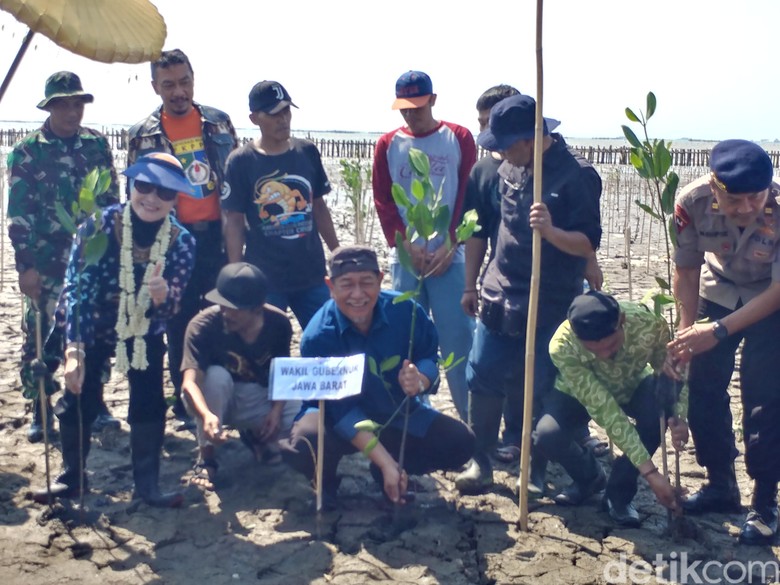 The event was held by Cirebon Power in collaboration with the NGO Pang Laot and was also attended by West Java Deputy Governor Deddy Mizwar. Deddy symbolically joined to plant mangrove seedlings on the shoreline.

In addition to preventing abrasion, it has been widely proven that mangroves have potential benefits to the community’s economy. Deddy appreciated the mangrove planting program at Klayan Beach.

He gave an example; the mangrove forest in Indramayu was initially limited to preventing abrasion. But over time the area is currently developing into a tourist attraction that is visited by many local and domestic residents.

“Not to mention that yesterday I went there it turns out they have more than 25 products from mangroves. Starting from soy sauce, crackers, to pecel and it taste very good,” Deddy said at the event location, Sunday (7/30/2017).

He hopedthat after Cirebon Power provides assistance, the local residents must be willing to take care of it. Treatment was not only carried out by the government, private sector, and academics, but the role of the community is also considered important because being the closest person and experiencing the direct benefits of mangroves.

West Java Provincial Government was committed to continuing to plant mangroves, especially in the area of ​​Pantura which is prone to abrasion. Moreover, sometime in the future the West Java Pantura area will become an industrial center that really needs extra supervision.

Cirebon Power Deputy Director Yusuf Arianto explained the provision of 20 thousand seedlings was backed by damage to the mangrove ecosystem in Cirebon District. Of the total 1,384 hectares, about 70 percent was damaged.

In fact, around 54 kilometers of coastline, it was predicted that 80 percent has been eroded by sea water and threatens the housing environment and ponds along the coast.

“Facing this problem for several years we have collaborated with a number of institutions to save mangroves or mangroves on the coast of Cirebon. This is our commitment to preserve the environment,” said Yusuf.

Besides being followed by elements of the government, police and military, this event involved a number of NGOs, CBOs, OKP, to students who were in Gunungjati District, Cirebon Regency.